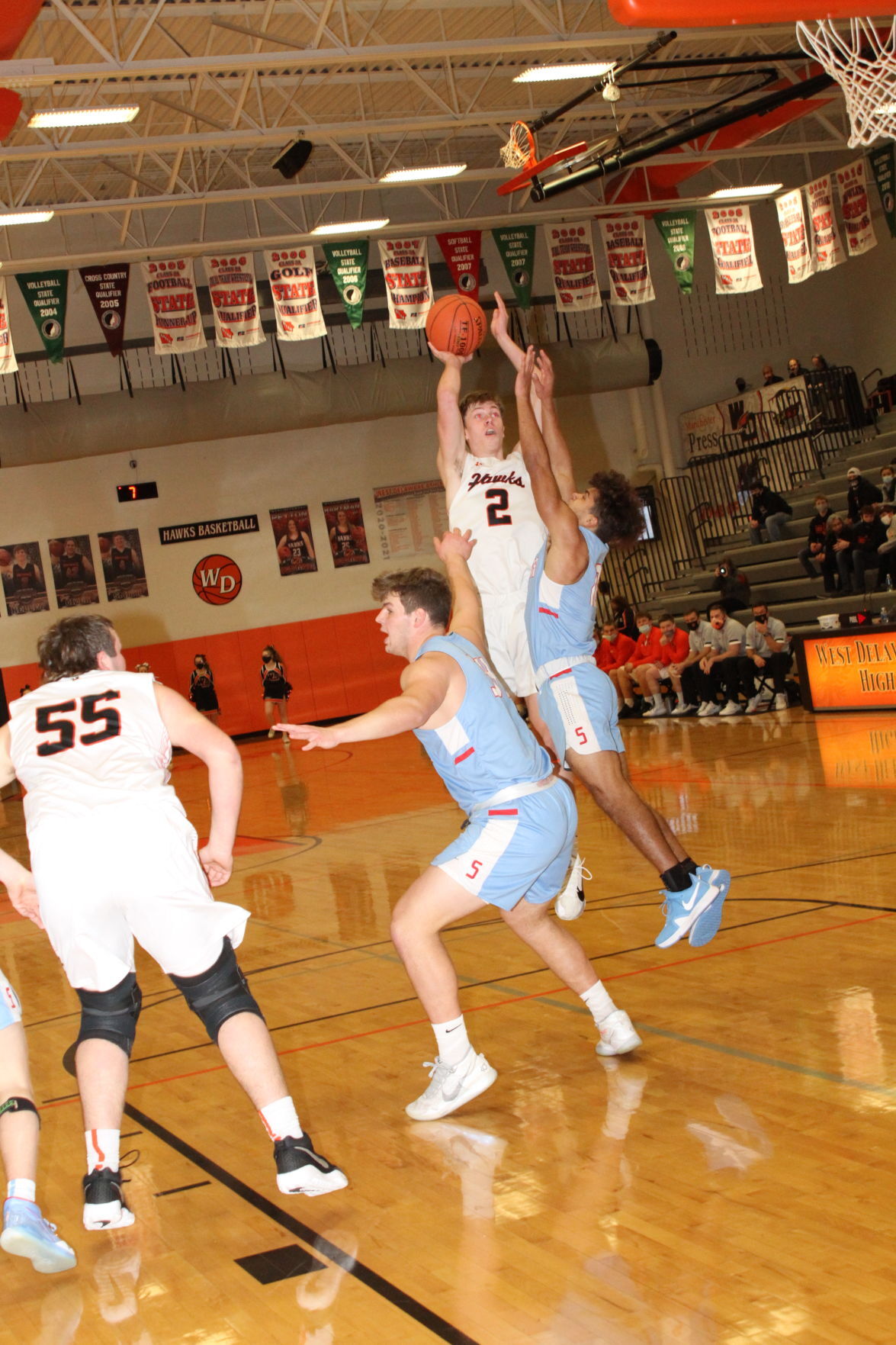 Kyle Kelley sends up a shot over the outstretched arms of a Dubuque Senior defender. 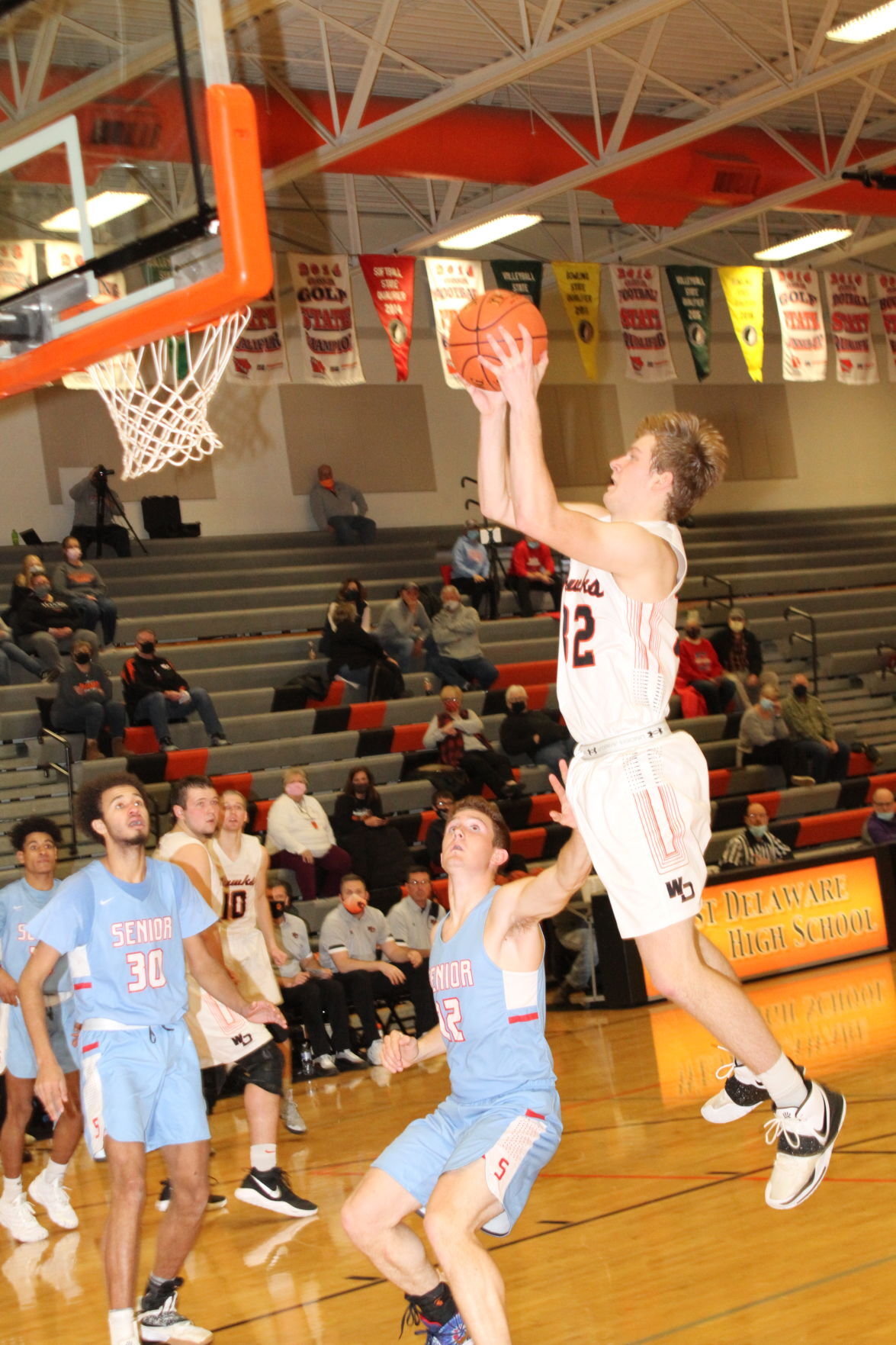 Eric Salow goes up to put one off the glass against Dubuque Senior.

Kyle Kelley sends up a shot over the outstretched arms of a Dubuque Senior defender.

Eric Salow goes up to put one off the glass against Dubuque Senior.

A banked in three-pointer at the buzzer by Dubuque Senior’s Cain McWilliams gave the Rams a 63-62 win over the West Delaware Hawks at Seedorf Gymnasium, Dec. 8.

McWilliams’ basket came after the Hawks took their only lead of the game just seconds earlier.

After the contest, West Delaware head coach Drake Schuring summed up the loss pretty succinctly, saying, “This one stings a little bit.”

West Delaware trailed 17-10 after the first quarter, converting a basket on only one of their first seven possessions. The Hawks had trouble guarding Senior’s Jim Bonifas, who had the Rams first seven points and finished the night with 21.

Bonifas got into some first-half foul trouble, but the Hawks couldn’t cut into the Rams lead. Instead, West Delaware went into halftime down 35-23.

Schuring said the lack of offensive rebounds came down to effort. “We preach getting to the glass, but sometimes tonight we were satisfied with just getting one show. Then you see what happens in the second half when we get offensive rebounds, we create for ourselves and we are much harder to guard when we have the ability to attack.”

In the third quarter, West Delaware’s Eric Salow scored a couple of quick baskets to cut the Senior lead to 38-31. A layup by Blake DeMoss and a three-pointer by Logan Woellert made it 39-36 Senior before Woellert’s putback got the Hawks within a point. Following a Senior basket, Woellert answered with a three-pointer for a 41-41 tie with 3:38 left in the quarter. Senior then went on an 11-4 run and led 52-45 after three quarters.

A free throw by Mitch Krogmann, followed by a DeMoss three-pointer, made it 54-49 Senior before a DeMoss floater in the lane made it a 54-51 game.

After a miss by Senior, Kelley attacked the basket, making the shot and drawing the foul. His free throw tied the game 54-54 with 4:40 left.

Senior responded with baskets by Bonifas and Tyler Schuster to take a 58-54 lead. A three-pointer by Kelley with under two minutes to play brought the Hawks within a point. Senior found Bonifas inside for a basket for the 60-57 lead with 1:20 left.

Jamison Smith’s pass found Krogmann inside for a Hawk basket to cut the lead to a point. Senior’s Schuster was fouled with 37 seconds left to play, but missed the front end of a one-and-one.

The Hawks came down with a chance to take the lead. DeMoss missed his shot attempt, but Salow grabbed the offensive rebound, made the basket and drew the foul. He made the free throw and the Hawks led 62-60 with nine seconds to play, setting up McWilliams’ heroics for the Rams.

Kelley led the Hawks with 24 points, while Salow had 11 and Woellert 10.

Schuring said the difference between the first and second half for the Hawks was their defensive intensity. “It was much higher and our ball pressure was better. We didn’t let them get any easy shots. We contested their jumpers better, which in turn, has an affect on how many jumpers you make.”

Kelley led the Hawks with 26 points and eight rebounds.