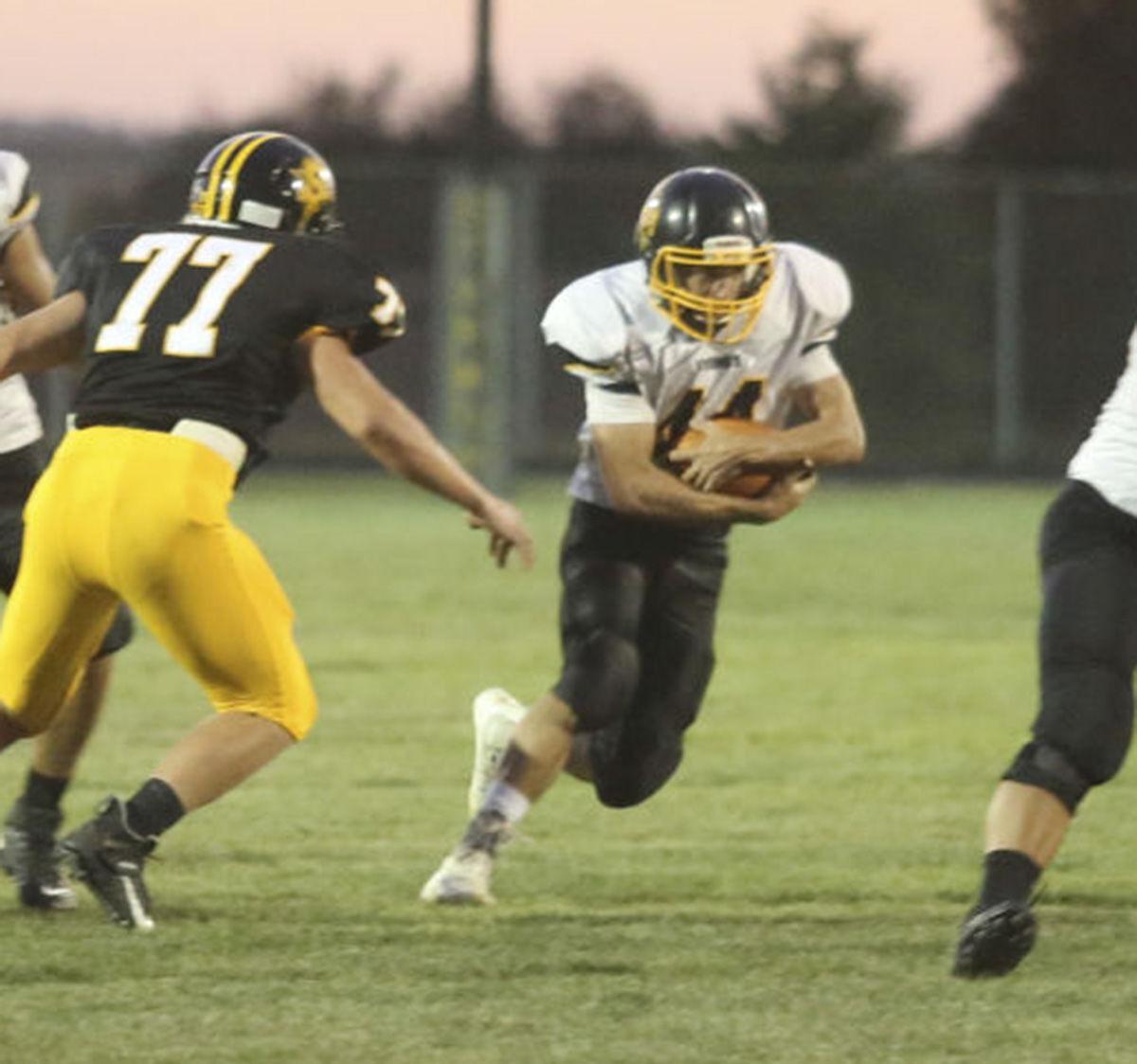 Ed-Co’s Cameron Kirby runs to daylight during the Vikings’ 14-0 win over Stamont recently. 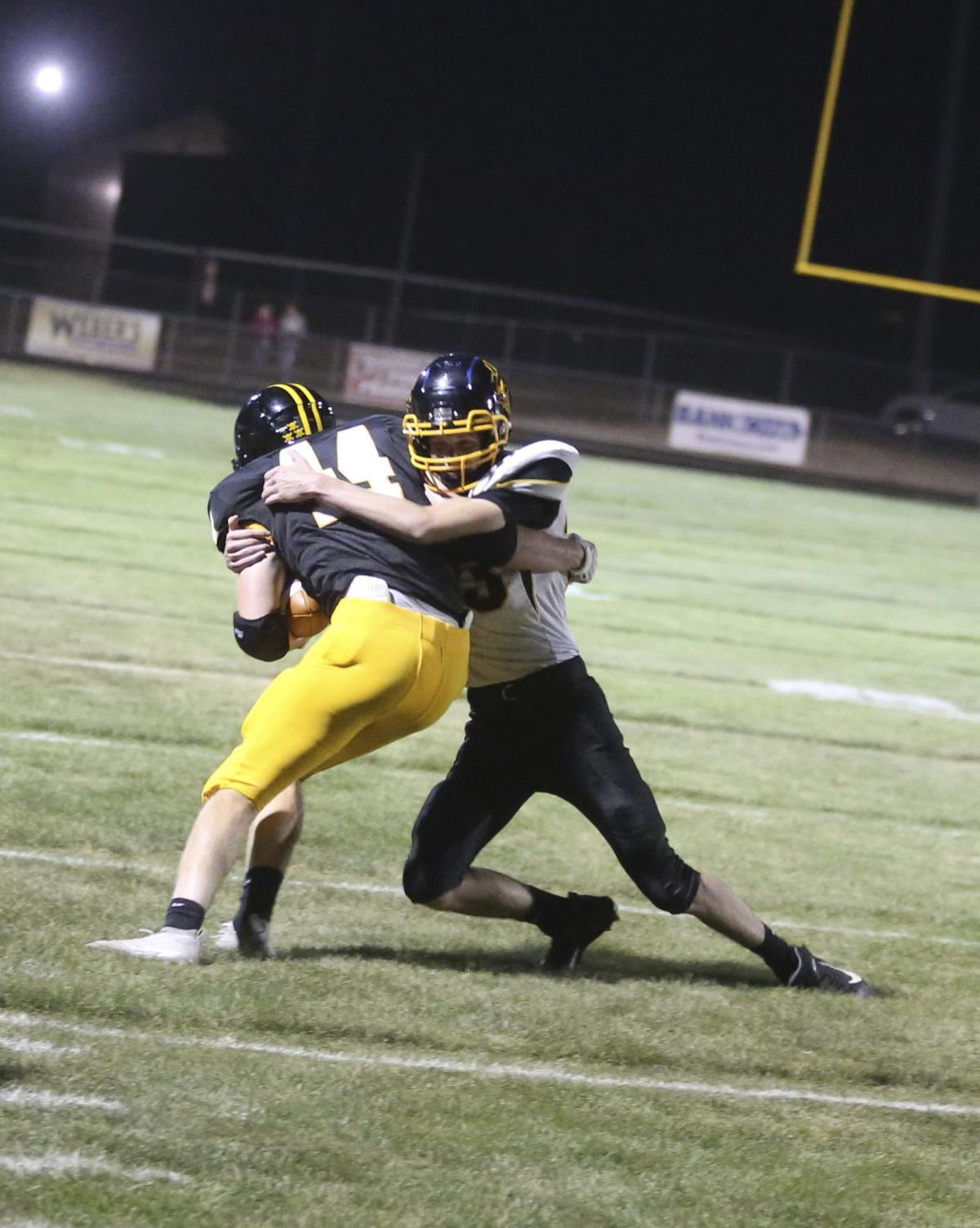 Ed-Co’s Mason Ashline brings down Starmont’s Declan Johanns in a win on Sept. 4.

Ed-Co’s Cameron Kirby runs to daylight during the Vikings’ 14-0 win over Stamont recently.

Ed-Co’s Mason Ashline brings down Starmont’s Declan Johanns in a win on Sept. 4.

Cameron Kirby’s nine-yard touchdown run early in the fourth quarter proved to be the winning play of the game as the Edgewood-Colesburg football team leaned on its defense to hold on for a 7-0 victory over Alburnett, Sept. 11, on the road.

“That was too close for comfort,” said coach James Rochford. “We were in the red zone twice in the first quarter but came away with no points. We just kept shooting ourselves in the foot. We just weren’t making plays to get the ball into the end zone.”

Playing on a very sloppy field, the Viking offense had little trouble moving the football until it reached Alburnett’s 20-yard line. That’s when the Vikings weren’t able to do the small things to get the ball into the end zone until the game-winning drive that started in the third quarter. Because of the conditions, the normally pass-happy Vikings turned to their ground game to move the ball. Knowing that, Alburnett shifted its defense to overload the Vikings’ strong side of their offense. Seeing that, Parker Rochford, the Vikings’ quarterback and son of the head coach, suggested to the coaching staff they run a couple of plays to their weak side.

After a couple of successful running plays, Alburnett shifted its defense back to a more balanced look which opened the door for the Vikings to run the ball back to their strong side.

“It worked. (Parker) was just reading the defense to what they were doing. There were a few times when I just gave him the reins to make the call because he has such a good feel for what’s going on out there,” said coach Rochford. “He did a good job and the offense came through. The kids hung in there. They continued to believe.”

After Kirby followed his offensive line and pounded his way into the endzone, the Vikings’ defense stepped up and did their job like they had done all season long. This was the Vikings’ second shutout in a row and the defense has only given up seven points this year.

“They did a much better job of controlling the line of scrimmage and making big plays when they needed stops,” said coach Rochford about his defense who made five tackles for loss. “It was wet and the conditions weren’t very good so neither team could throw the ball very well. They just stepped up and put us in good condition most of the night.”

The Vikings out-gained the Pirates 162 yards to just 59, but when they weren’t able to finish off drives they gave Alburnett long fields to deal with. The Vikings’ punting game also put the Pirates deep in their own territory.

“We punted the ball real well. We used our kicking game to pin them deep, so I felt that was a real benefit to us,” said coach Rochford pointing to the fact that Alburnett had to start two drives inside their own 10. “That’s a long way to go especially under those conditions.”

Offensively Edgewood-Colesburg has scored 68 points in three weeks and finishes the non-district part of the schedule with a record of 3-0 as they move into district play Friday when they battle the always tough East Buchanan Buccaneers (1-2).

That will also be the Vikings’ first home game of season.

“Putting ‘W’s’ up, that’s great but we just need to get better,” said coach Rochford. “We were one block away so many times from making a bigger play or getting the runner free so he could have gotten into the end zone. We need to get there. It’s not just one person. It’s everybody. We’re young and we just need to communicate a little bit better. If we can get that taken care of offensively, it will make a big difference for us.”