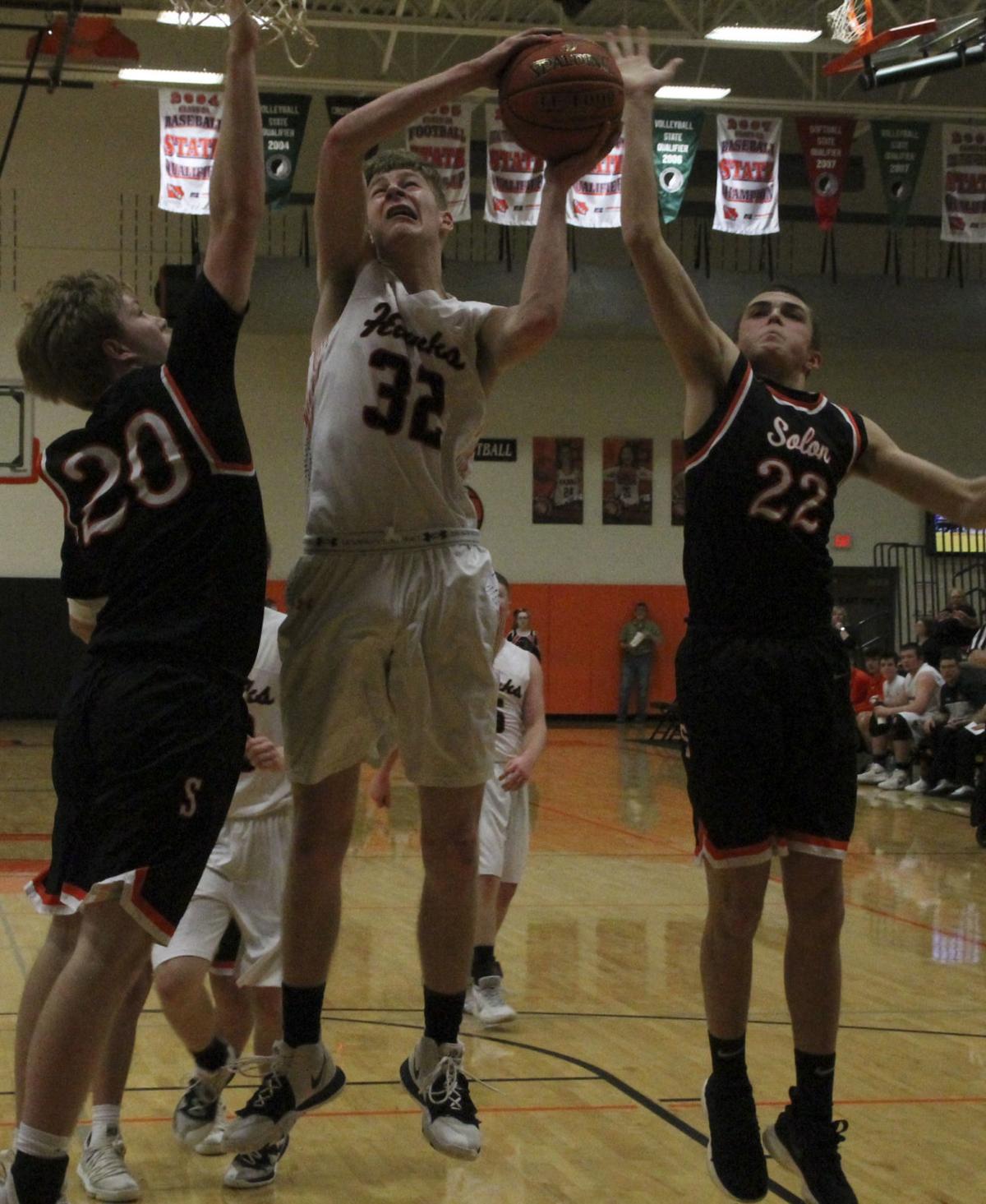 Eric Salow shoots a shot under the basket with two defenders on him. 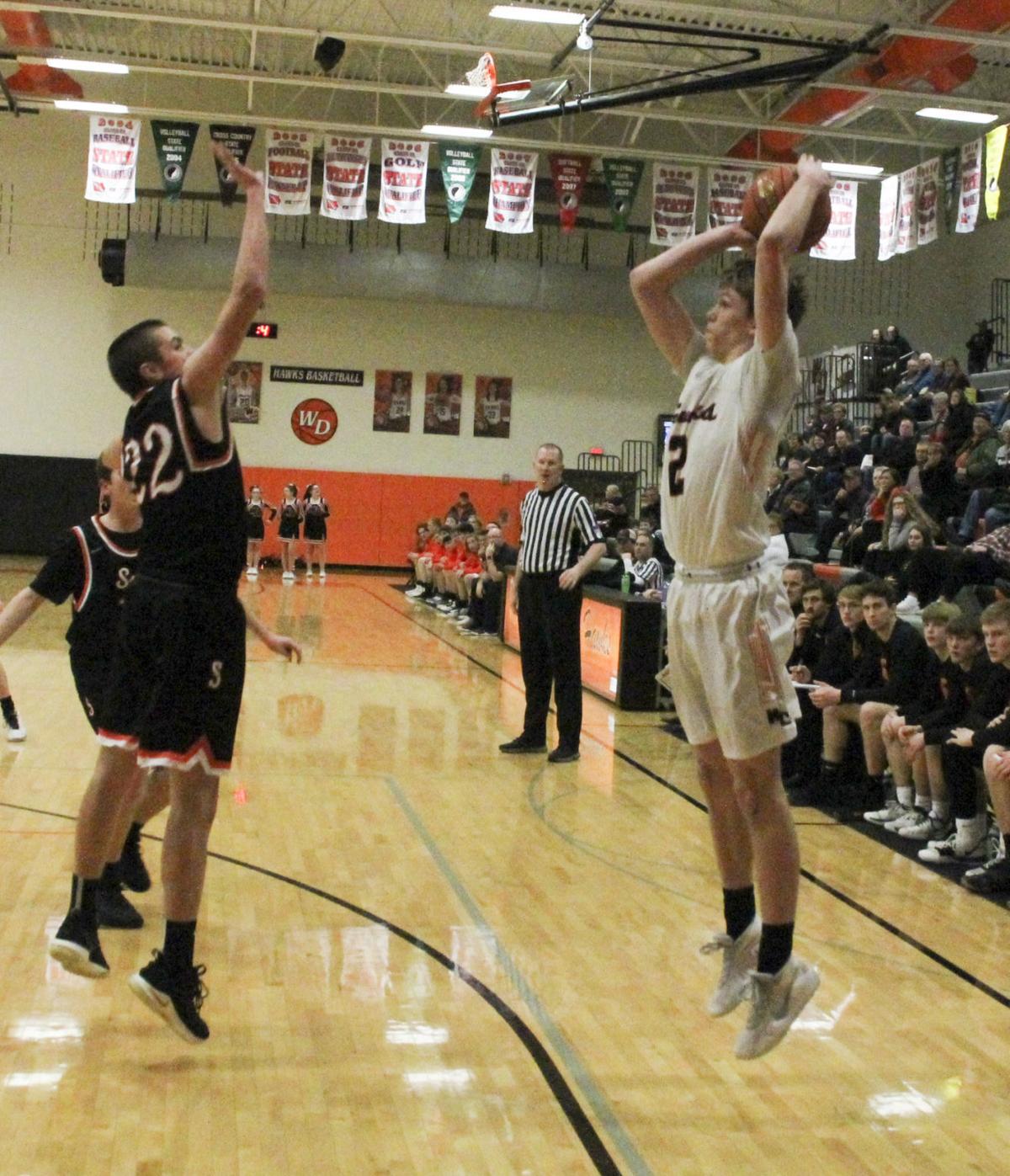 Kyle Kelley shoots a three-pointer with two defenders coming at him. 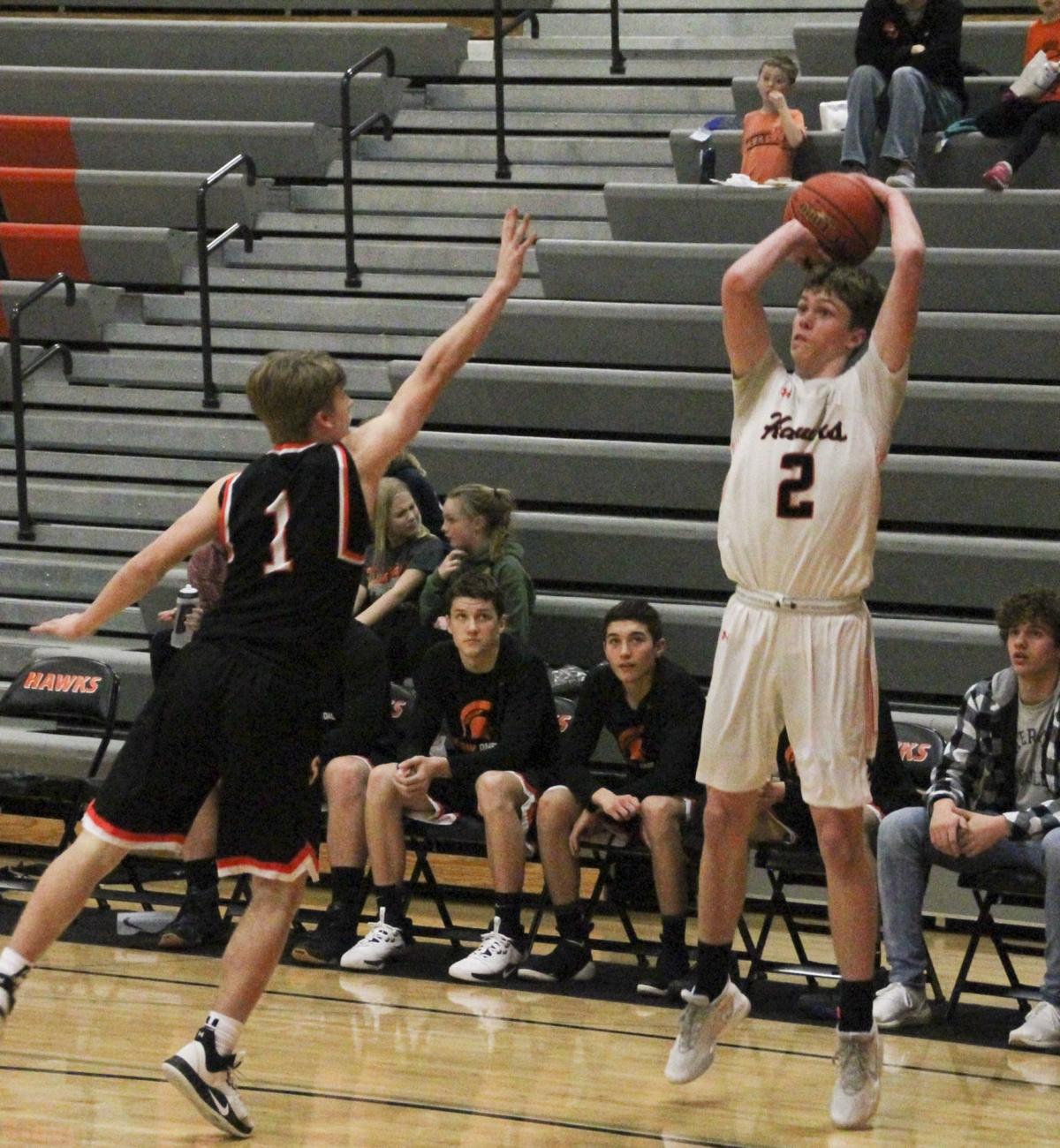 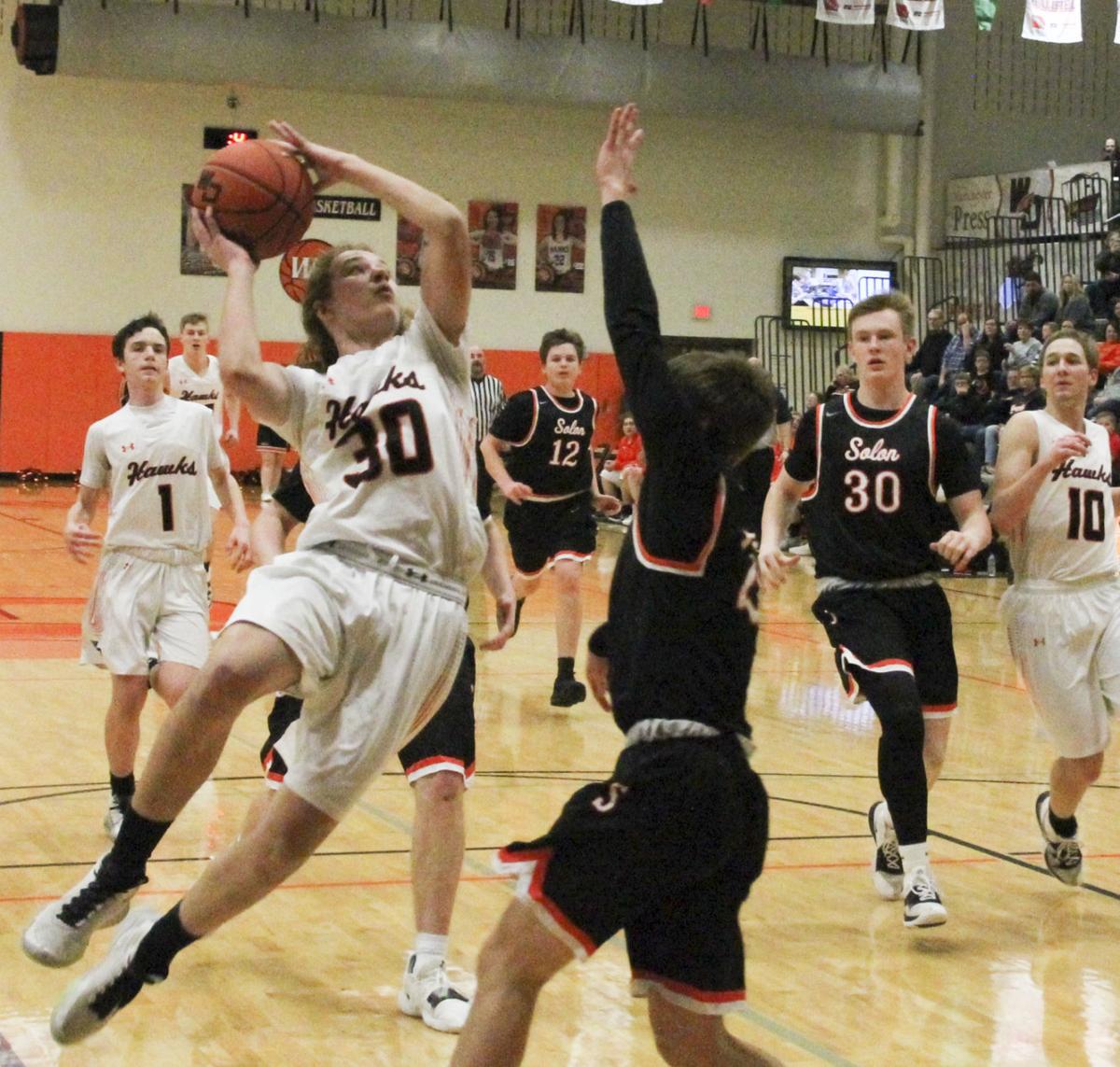 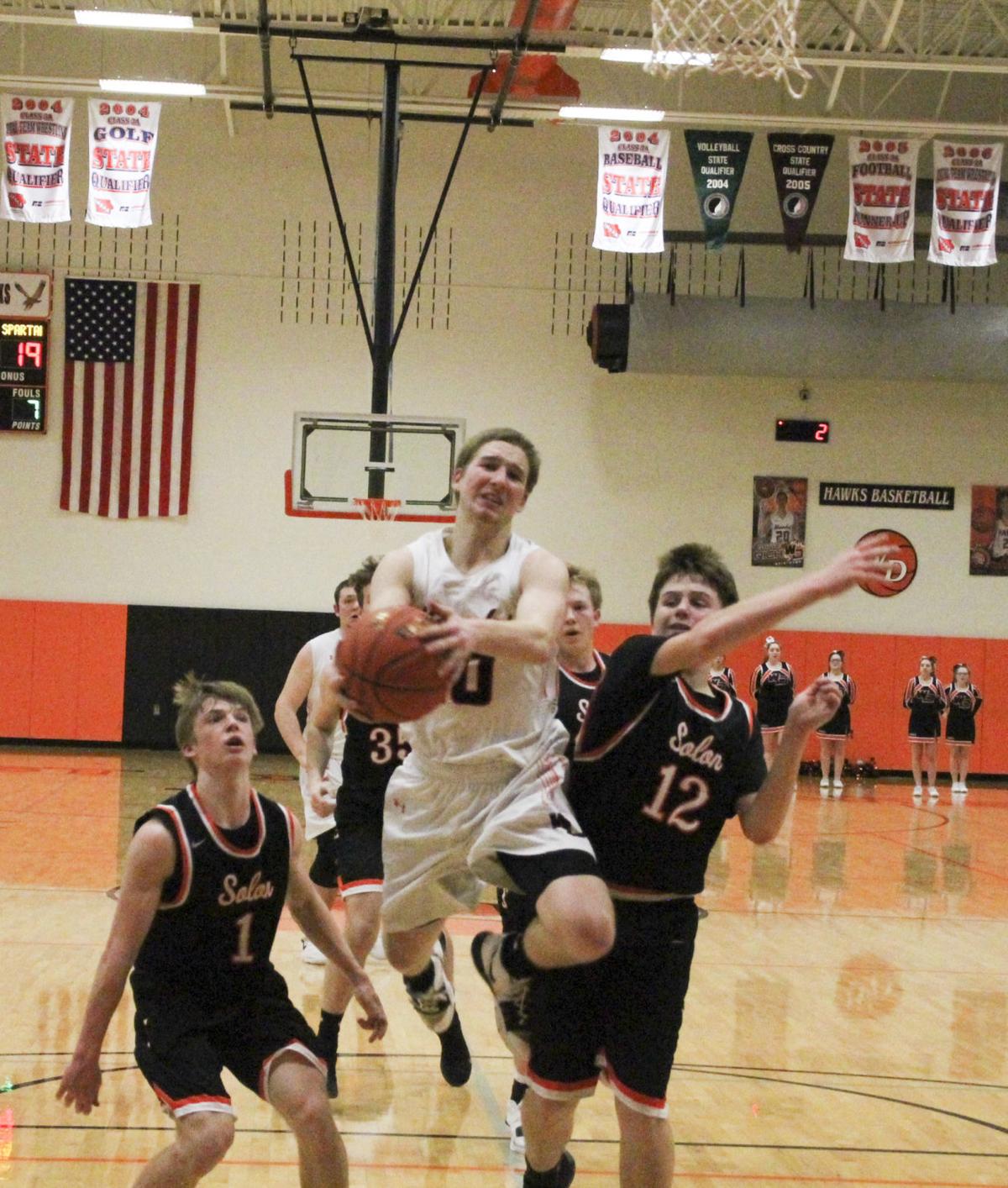 Logan Woellert attempts a shot after being fouled in the point.

Eric Salow shoots a shot under the basket with two defenders on him.

Kyle Kelley shoots a three-pointer with two defenders coming at him.

Logan Woellert attempts a shot after being fouled in the point.

With three players in double figures and balanced scoring throughout the rest of the lineup, the West Delaware boys’ basketball team handled Solon, 65-41, at home, Feb. 7.

The Hawks led 20-13 after the first quarter, despite committing four turnovers on their first five possessions. But a time out by head coach Matt Uthoff settled down his team, thanks to a change on offense.

“We made an adjustment as to how we were going to attack Solon’s 1-3-1 zone. Our kids executed that change perfectly,” Uthoff said.

That change led to three straight three-pointers on Hawk possessions. The Hawks stretched their lead to 36-20 at halftime and led 51-26 after three quarters.

“We didn’t start Salow and brought him off the bench for the first time this season,” Uthoff explained. “He came in and played well. He had high energy tonight. He’s a very talented player. Krogmann has been playing well too. When we get both of those guys going, it helps our guard game and takes the pressure off of our perimeter players.”

Uthoff said it was one of his team’s best efforts this season. “We competed hard all 32 minutes, we shared the ball well, we got out and ran in transition, which is something we have talked about but we haven’t done yet this season. I thought it was the best we’ve played defensively. It was a great all-around team victory.”

Earlier in the week the Hawks lost at Mount Vernon 69-50. West Delaware trailed 13-10 after a quarter and 32-24 at halftime. It was a game that saw the Hawks struggle to score.

“Mount Vernon is really good,” said Uthoff. “For us to beat them, we have to play pretty close to perfect basketball. I thought we did that for the first quarter and a half. Mount Vernon is so disciplined that if you make one little mistake, they make you pay. I felt late in the second quarter and all of the third, every little breakdown we had they capitalized on. We kept fighting, but just couldn’t get the ball to go in the basket the second half.”