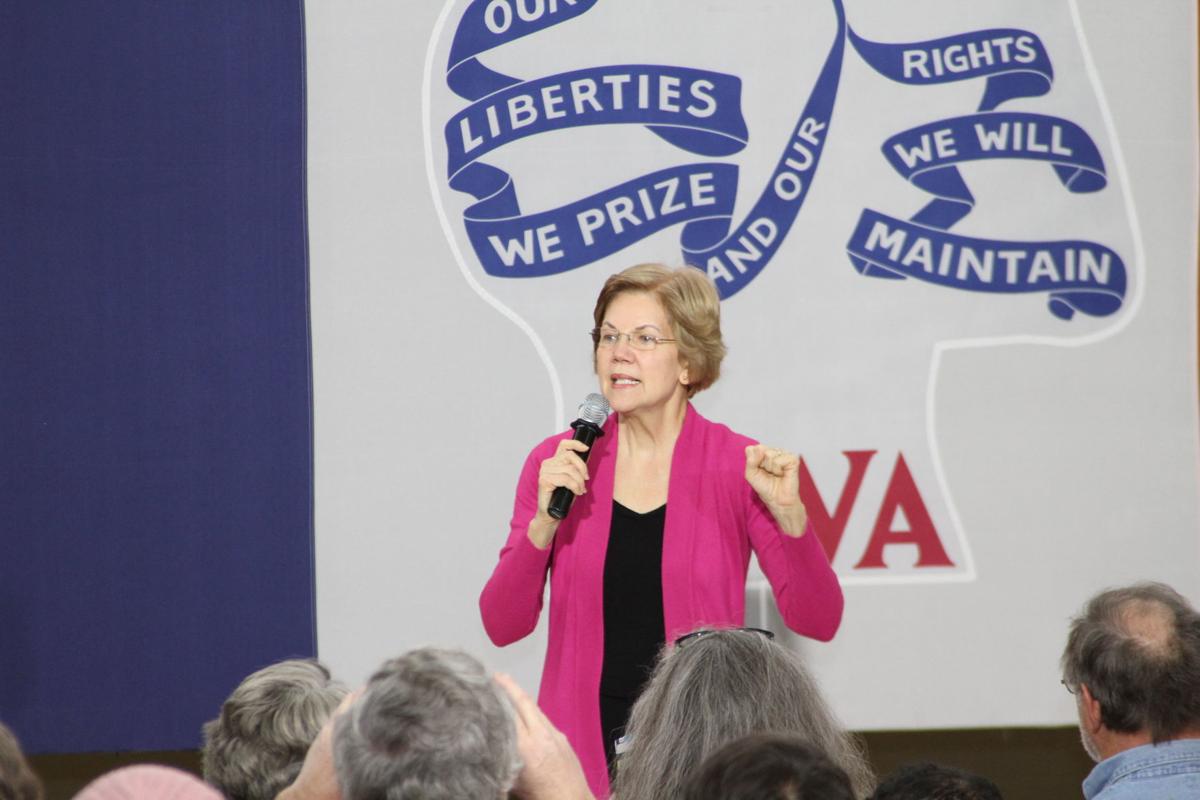 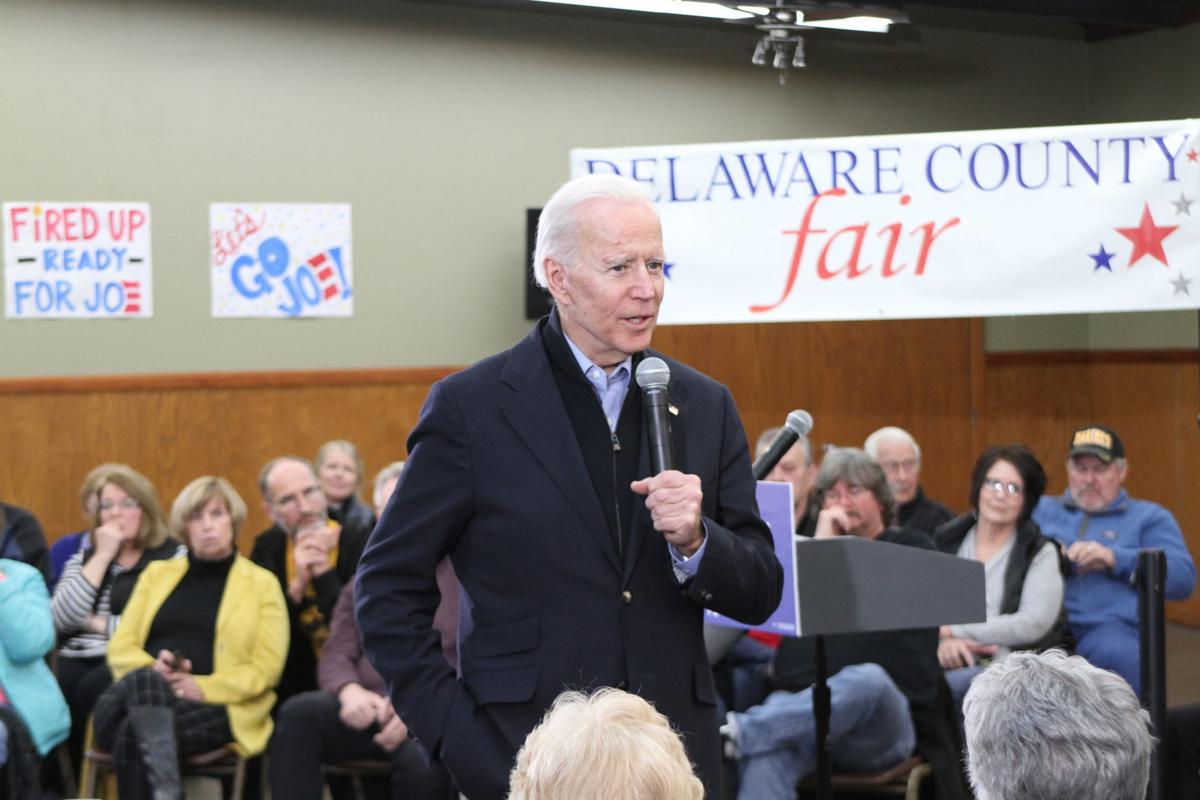 Two candidates seeking the Democratic nomination for president made their pitches to supporters at stops in Manchester last week.

Warren told her audience the federal government works fine for the wealthy and giant corporations but forgets about working families.

“Why is the middle class being hollowed out,” she asked. “Why is it people who work every bit as hard as my mom and dad did two generations ago now find the path so much rockier and steeper? The answer is about the decisions that get made in Washington and who the government works for.”

She called out drug companies, oil companies and those who invest in prisons and private detention centers at the southern U.S. border. “We have a federal government that works great for them, just not for people trying to get a prescription filled, people whose lives are torn apart by those prisons and for those of us who see climate change bearing down on us.”

She told the audience it’s about money. “Money flows everywhere through Washington. It’s about campaign contributions, lobbyists, lawyers and PR firms. Whatever issue you brought here today, if there is a decision to be made about it in Washington, I guarantee it has been influenced by money. When you see a government that works great for those with money and not so great for everyone else, that is corruption pure and simple and we need to call it out for what it is.”

Warren described an anti-corruption plan to combat what she sees happening. Her plan calls for ending lobbying as it currently exists, ending the relationship between Wall Street and Washington and requiring those running for federal office to put their tax returns online.

“If we can disrupt the influence of money, if we can knock them back on their heels a bit, if we can hold government accountable, then all types of change are possible. We can make government work for everyone.”

Warren called for enforcing anti-trust laws to make it easier for new businesses to get started. “Big corporations have so much power over their employees, their customers and even the cities they are located. In Washington, they are getting the rules tilted in their favor.”

She said enforcement of the anti-trust laws could return more local control and provide more opportunities for businesses, including agriculture, saying “This relates to big ag too. Yes, big ag, I’m coming for you.”

She said the federal government should be investing in local farms and offer partnerships to help fight climate change. “We would partner up if farmers wanted to, if they are using sustainable methods if they can provide food for local markets. The government could guarantee their model is profitable. Not the model for giant ag, but one that is sustainable for family farms.”

She told the crowd that while the economy creates new wealth and new income every year, that money stays with 1% of the people.

“Trickle-down economics for the last 40 years has been a disaster. Besides the anti-trust laws, we need to put more power in the hands of workers. We need to make it easier for people to joins unions and to give unions more power.”

She also said it’s time for a wealth tax in the United States, calling for a two-cent tax on fortunes above $50 million dollars.

After her appearance, Warren spoke with the press and addressed President Trump ordering the killing of Iranian military commander Qasem Soleimani.

“Donald Trump has taken us to the brink of war. We don’t need more war in the Middle East. We have been at war in that region for 20 years.”

She expressed skepticism about the administration’s claim that the killing of Soleimani was a preemptive strike because of imminent threats to United States interests. “The administration has no credibility for telling the truth either at home or around the world. The administration can’t even keep their own story straight. Donald Trump has ordered the killing of an Iranian government official, a high military leader. In doing so, he’s escalated the likelihood we will end up in another war.”

Biden told his crowd the 2020 election may be the most important election in history. “It’s not because I’m running, but because of the man in the office now. With a whole lot of hard work, some luck and the right candidate, we can handle four years of Donald Trump. It can turn into an aberration instead of a fundamental change. But if we end up with four more years of him, I believe Donald Trump fundamentally changes our nation and who we are for at least a generation.”

He criticized Republicans for their stances on education, the environment and health care, citing something his father used to say to him. “My father used to say ‘show me your budget and I’ll show you what you value.’ It’s clear the Republicans don’t value education very much. They don’t want to spend any money on it and are actually cutting funds. They deny global warming. It’s also pretty clear they don’t have any real sense of how critical health care is and how critical having it is to someone’s peace of mind.”

Biden called for the country to become unified again, but warned it won’t be easy.

“We can’t keep going the way we are. But the days of walking across the aisle to work with Republicans are gone. It’s a different Republican party and I understand that. I’ve been the object of their attention for a long time. They have spent millions of dollars telling lies about me.”

He said he expects whoever the Democratic nominee is to be attacked by Republicans. “Whoever it is will be the object of lies by this administration. But the next president will have to know how to unify. They will have to be big enough to step around it and move on. We won’t fight with Republicans about their personalities, just their positions on issues.”

Biden said the economy is doing well for people in the top 1%, but not for the majority of Americans. “The middle class is in real trouble. We are no longer the wealthiest middle class in the world. Many middle class parents don’t think their children will have as good a standard of living as they have. Farmers also aren’t doing so well and neither is manufacturing.”

Biden said that despite that, he sees a bright future for the country. “I’m more optimistic now about America’s chance to lead the world into the 21st century than I’ve ever been in my career. We have the most productive workers in the world.”

He noted the United States has more research universities than the rest of the world combined. “Every significant idea that has changed our lives over the last 20 years has come out of one of those universities.”

He said the world will look to the United States to lead the way. “We have the ability to impact the entire world. It’s not just an example of our power. It’s the power of our example. It’s who we are, our values. That’s why the rest of the world looks up to us. There has never been a time in our entire history where we’ve acted to solve a problem and were unable to do it when we’ve come together.”