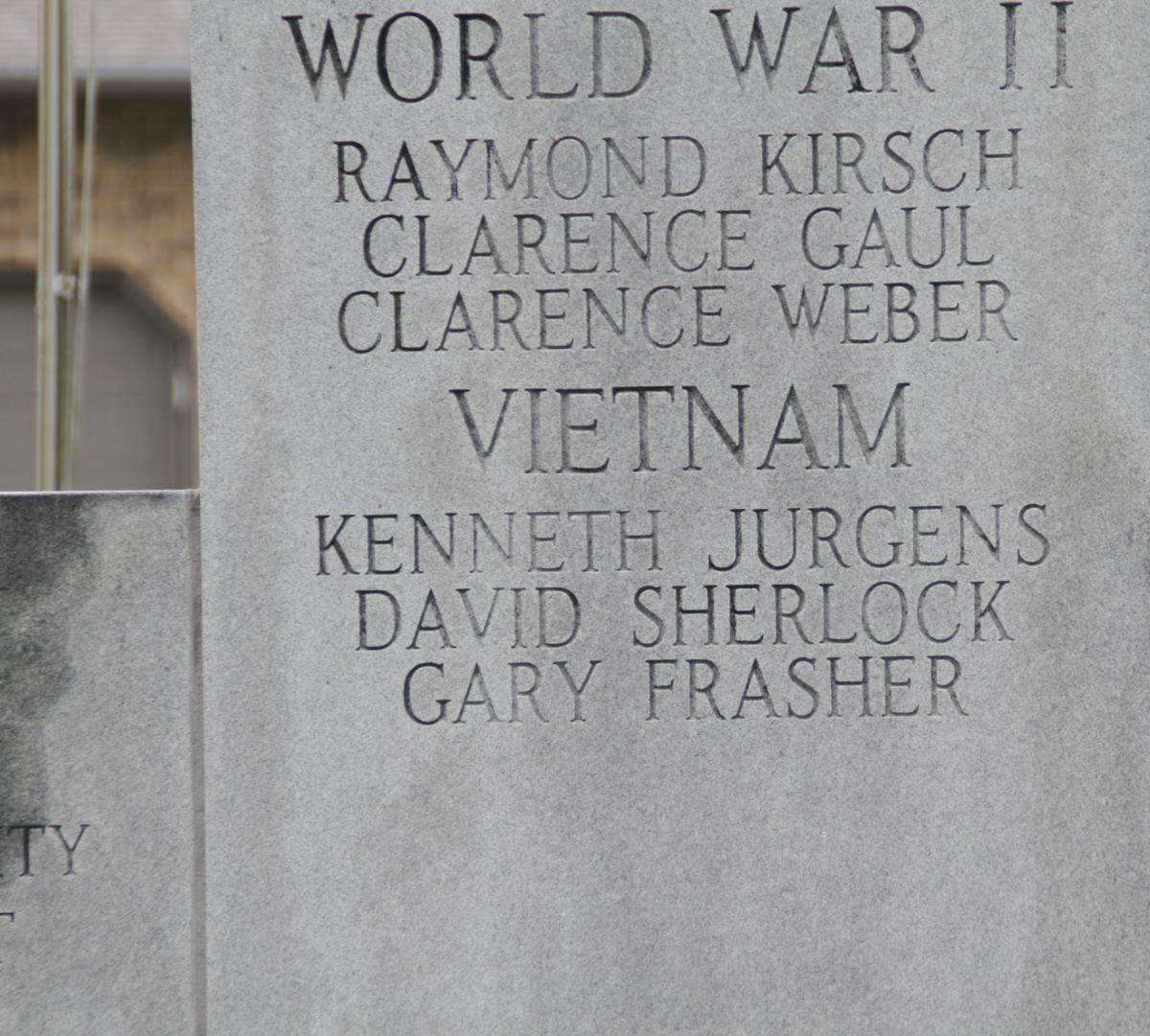 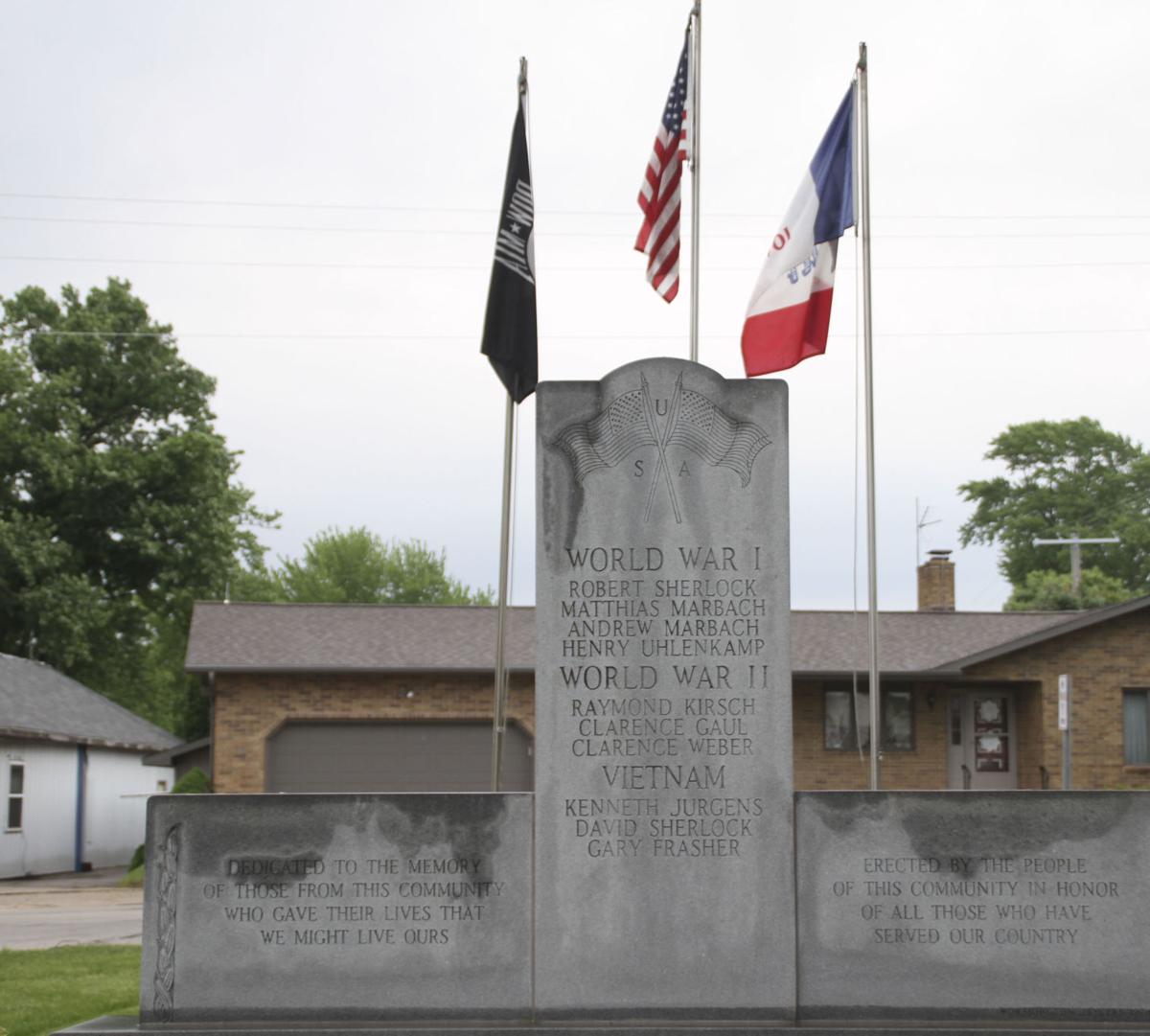 The Veterans Memorial in Worthington bears the name of Kenneth Jurgens, as well as those of David Sherlock and Gary Frasher, all of whom were killed in Vietnam. 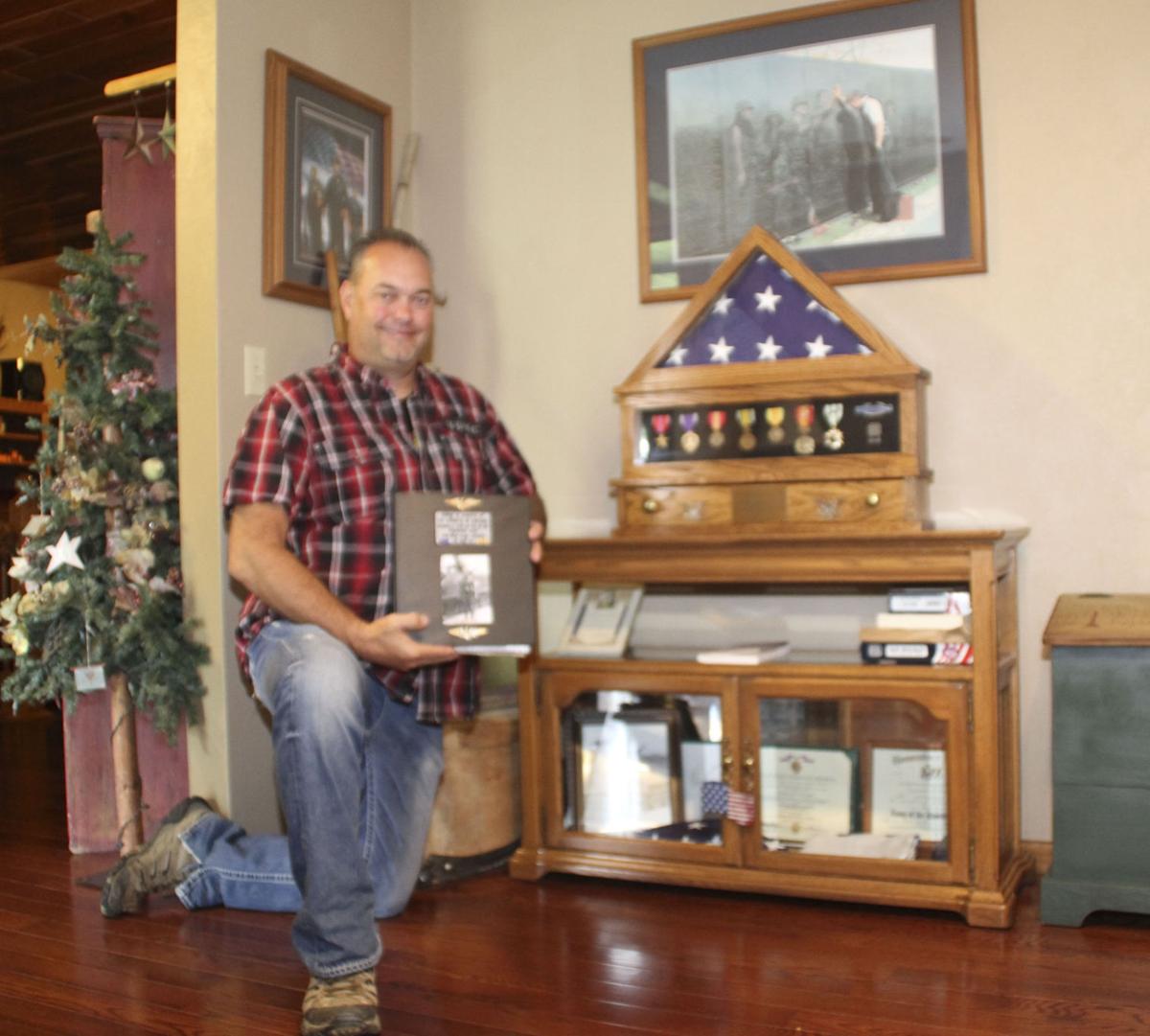 Rod Jurgens kneels in front of the memorial he created in his home honoring his uncle, Cpl. Kenneth Jurgens, who was killed in Vietnam.

The Veterans Memorial in Worthington bears the name of Kenneth Jurgens, as well as those of David Sherlock and Gary Frasher, all of whom were killed in Vietnam.

Rod Jurgens kneels in front of the memorial he created in his home honoring his uncle, Cpl. Kenneth Jurgens, who was killed in Vietnam.

The story of Kenneth (Kenny) Jurgens’ life was pretty typical of most boys coming from Small town Iowa.

He helped out on the family farm in Hopkinton, and graduated from St. Paul in Worthington in 1965. Neither he nor his family or friends knew what the future held for their son, brother, nephew and friend.

What, thankfully isn’t typical, is the story that is told in the scrapbook assembled by his nephew, Rod Jurgens, from Hopkinton. It chronicles Kenny Jurgens’ sense of honor and duty.

Like many boys at the time, Kenny Jurgens was drafted and entered the Army in May 1966. By February of ‘67, he was “in country” in Vietnam, part of Company C 2nd Batallion 47th Infantry 9th Infantry Division.

When he had time, Kenny Jurgens wrote letters home — 27 in all during his time in the Army. The letters talked about “C” rations and questioned about the machine shed and when his dad was going to get the corn in.

On March 17, 1967, Kenny Jurgens wrote a letter to his parents that said in part, “Went on a ambush patrol last night… Suppose (sic) to go on another patrol in an hour or so.”

After placing the letter on his bunk, Kenny Jurgens went out on that patrol.

The next day, Platoon Sgt. Harold G. Rickeson wrote, “Dear Mr. & Mrs. Jurgens, It is with deep regret and sorrow that I and men of the 1st Platoon of Company C 2nd Batallion 47th Infantry (Charging Charlie) offer our sympathy at the recent loss of your loved one and one of ours. Ken was a very outstanding soldier and gave his life for a cause we all believe in (sic) peace and freedom for all. Any further assistance or information you may need, feel free to contact us. God Bless you all.”

Kenny Jurgens was shot and killed by a sniper’s bullet roughly 25 miles north of Lai Khe. He was just 20 years old.

William and Mary Enette Jurgens, Kenny’s parents, received letters of condolence from Gen. William Westmoreland and President Lyndon B. Johnson, but perhaps the letter that meant the most to them was the last correspondence Kenny wrote before heading out on his final ambush patrol. Kenny Jurgens’ parents received his March 17 letter on March 27, 1967. It was the day they and Kenny’s brother, Richard, and sisters Kay (Lawrence) and Darlene (Bradt) laid him to rest in the St. Paul Cemetery.

His name appears on the Veteran’s Memorial in Worthington, along with the other two sons the town lost in Vietnam. His name is also on the Vietnam Memorial in Washington, D.C.

“I can barely remember him,” Rod Jurgens said of his uncle Kenny. That’s part of what drove Rod Jurgens to collect all the materials for his scrapbook.

“A friend of mine, Gary Besler, retired out of the service,” Rod Jurgens said. “We have coffee in the mornings. Ten years earlier the Manchester Press did a ‘40 years ago’ story on (Kenny). I said, “We need to do something.”

Iowa Senator Chuck Grassley made sure Kenny Jurgens was awarded all his medals posthumously. They are now displayed in a shadow box built by Norm Parsons.

It’s now been 50 years since Kenny Jurgens was killed, but Rod Jurgens still gets emotional when discussing it.

“War is hell,” he said. “We’ve paid the ultimate price here, our family has.”

Rod Jurgens’ feelings about the often-negative comments and treatment the Vietnam veterans received when returning home remains a sore spot.

“I don’t think any of these guys signed up for it,” he said. “I’m still pretty emotional about it today.”

Kenny Jurgens is gone, but Rod Jurgens is doing his best to assure that his uncle’s service and sacrifice is not forgotten.