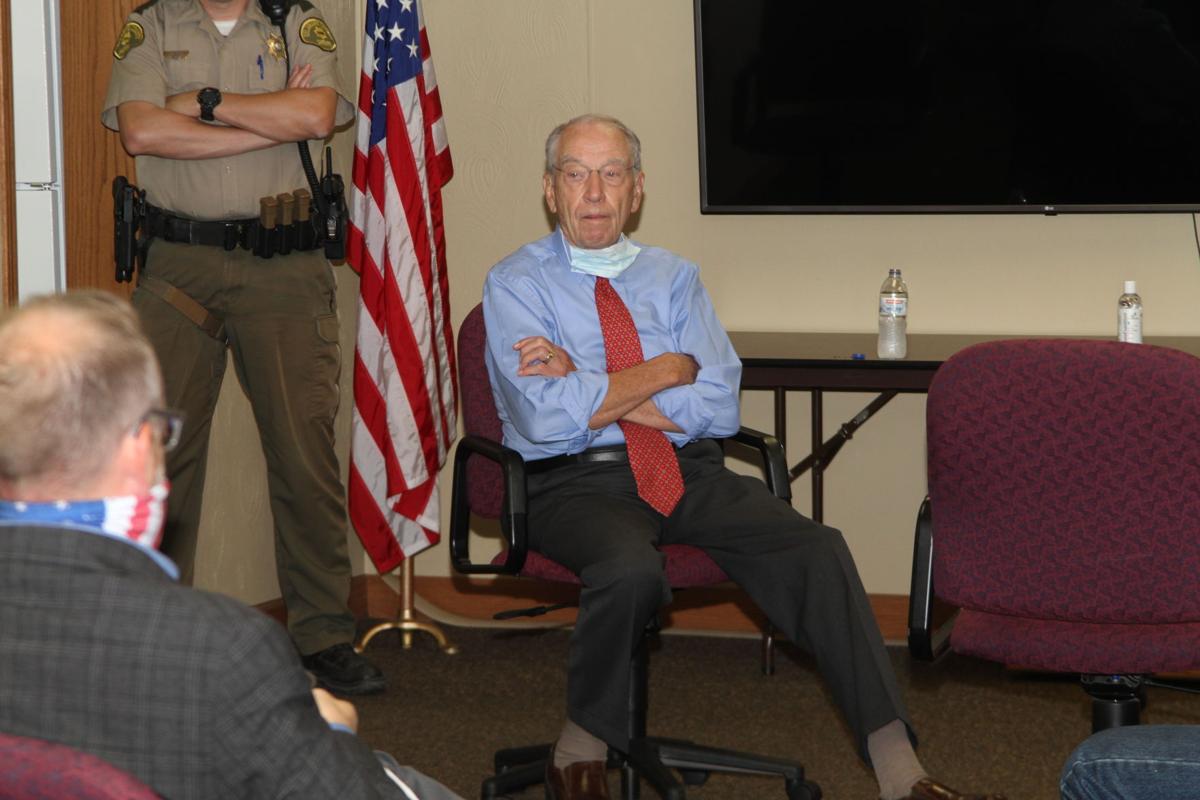 U.S. Senator Charles Grassley listens to a question during his stop at the Delaware County Farm Bureau office in Manchester, Sept. 3. 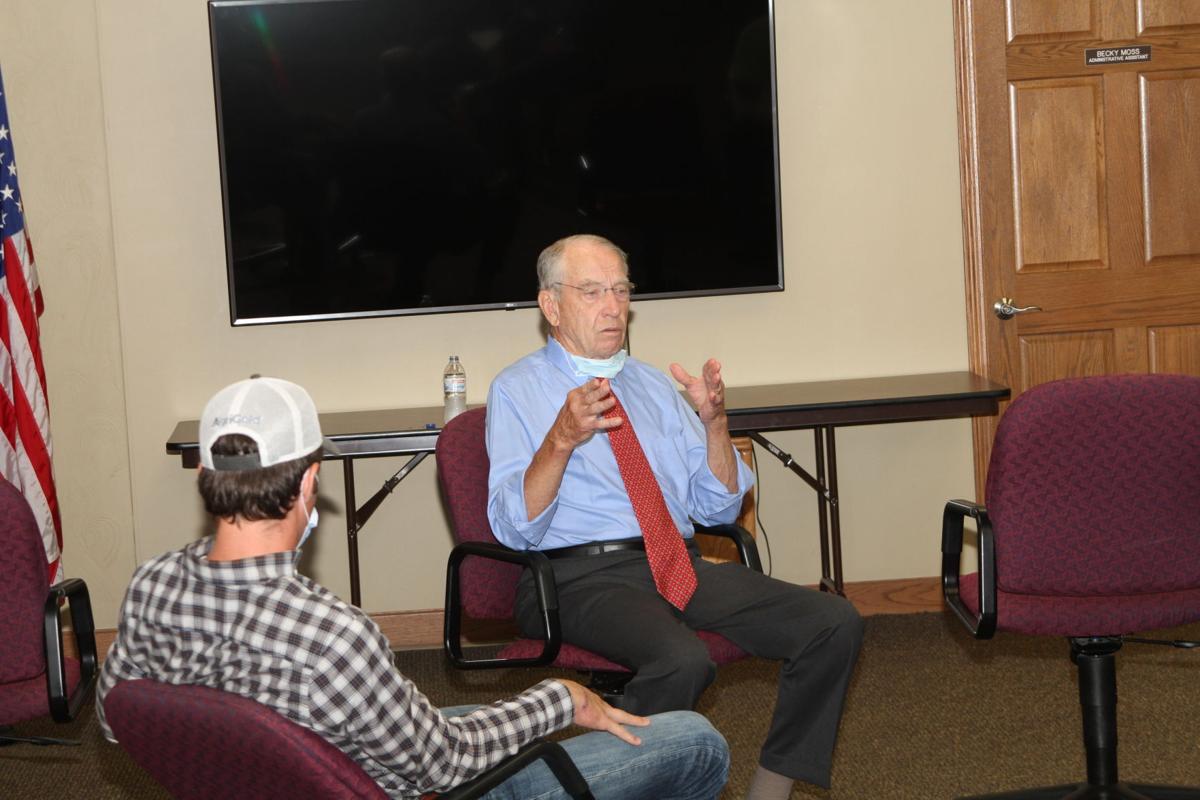 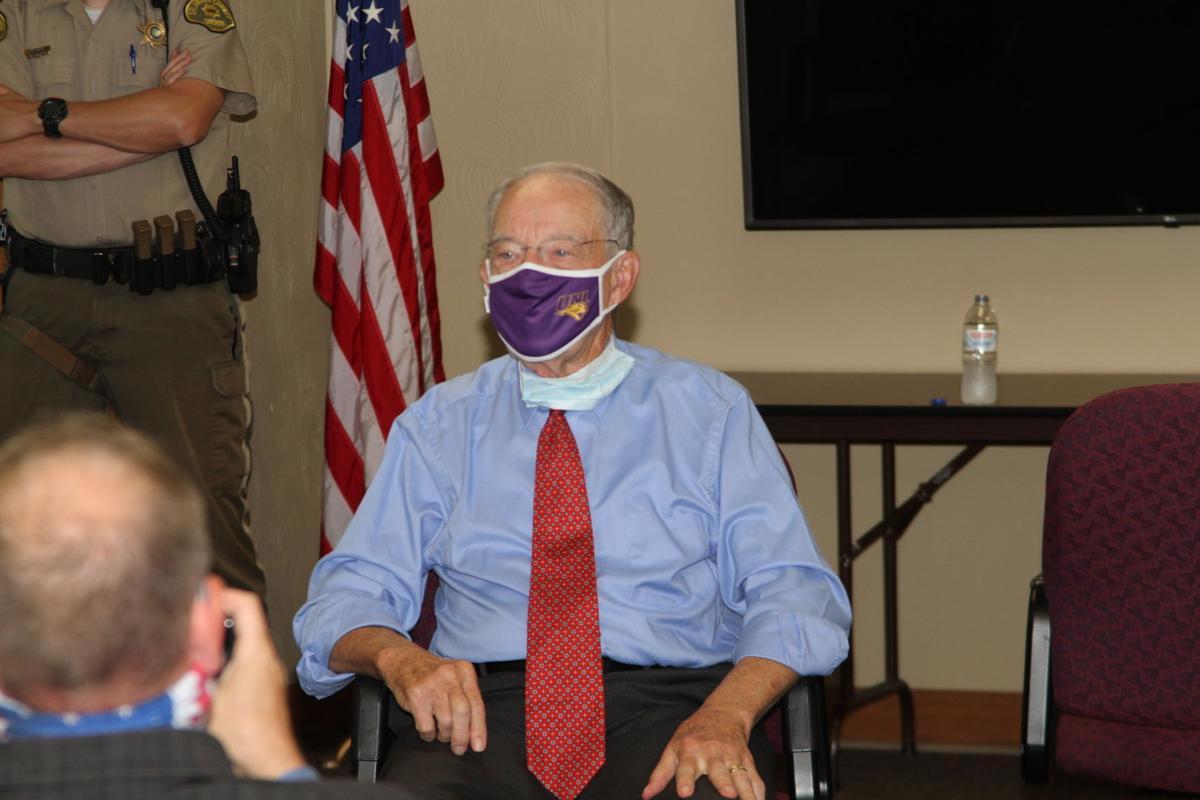 U. S. Senator Charles Grassley puts on his UNI face covering after having it given to him during his stop in Manchester.

U.S. Senator Charles Grassley listens to a question during his stop at the Delaware County Farm Bureau office in Manchester, Sept. 3.

U. S. Senator Charles Grassley puts on his UNI face covering after having it given to him during his stop in Manchester.

A visit to the Delaware County Farm Bureau office in Manchester last week by U.S. Senator Charles Grassley touched on farming concerns as well as safety and law and order.

The Iowa Republican, now in his 40th year representing Iowa, was in town Sept. 3 for the first of four county visits in a day that would see him complete his tour of all Iowa counties.

Now known as the “Full Grassley,” the senator said his county visits are the best way for him to visit with constituents. He planned to complete the day with additional stops in Dubuque, Jackson County and Clinton County. And after 40 years of visiting each county each year, Grassley admits his efforts may have helped improve the give and take between elected officials and constituents.

“I think the fact that public officials feel they ought to do it, they get good turnouts. You usually get great respect from people because you have taken the time to visit with them.”

Grassley said he didn’t start out to set some type of standard for officials by making the annual visits. Instead, he said, he does the tours to let people know he’s listening to them. “It just seemed to me like this is what I could do to let the people know that I was interested in them all the time and not just during an election year. It turned out to be a way I could keep in touch with people. I think it’s the best way, but not the only way.”

Grassley said that face-to-face interaction is at the heart of democracy. “I have a responsibility to set an example that I am one half of the process of representative government and that you’re (constituents) are the other half.”

Grassley was asked to respond to critics that accuse him of picking and choosing where he visits in a county.

“I’ve been doing this the same way for 40 years. I try to get a cross-section of the population.” Grassley noted that while his visit to the Farm Bureau office was to a small group, his last visit to Manchester was an open meeting in the courthouse that drew 200 people. “I can do that in all 99 counties, but I never have. I always go to a few high schools, a few factories, a few businesses, hospitals and social clubs. I try to go to the people who can’t come to me.”

Grassley said he heard the same concerns at his Manchester stop that he had been hearing across the state. “I hear about trade with China, waters of the U.S., what’s going on with additional money for agriculture because of the coronavirus and low prices now. The only thing I didn’t hear today I heard in some other stops was about the wind damage counties suffered because of the derecho.”

A comment during his meeting addressed rioting in U.S. cities and a need for law and order. After the meeting, Grassley said those comments are the type of common sense and pragmatism he learns from his 99-county tour.

Grassley said the challenges of COVID-19, racial unrest and the derecho in Iowa are unlike any single year he has seen during his time in Washington. He said the closest he’s seen to this was a three-year period in the 80s. “We saw farmers committing suicide and families crying when their farm machinery was up for sale or their farms were being repossessed. That was pretty bad.”

He also spoke to reporters about the security of the upcoming election in the United States, addressing comments President Trump made a day earlier to a group in North Carolina, encouraging them to vote twice, once by mail and then on election day to check their mail-in vote counted.

“The President can’t ask people to vote twice. We have to follow state laws,” Grassley said. “I think if people want to make sure their vote is cast, they ought to vote in person.” Grassley said if people want to vote by mail, they should do so early, acknowledging that “I’m going to vote by mail.” He said 10 states have a short window from the time an absentee ballot may be requested to when they need to be returned. “You should get your ballot as fast as you can then return it,” adding, “in all other states, Iowa included, I don’t think there is a problem unless you request your ballot at the last minute.”

A bill sponsored by Grassley lowering the costs of prescription drugs did not come up at the meeting. “That bill would let us lower the prices of prescription drugs. Had we not had the virus, it might be law by now. But the virus took all the oxygen out of Washington right now. The President is trying to do what he can to keep it alive by executive order, but none of it is going to accomplish what my bi-partisan bill would accomplish.”

I have a responsibility to set an example that I am one half of the process of representative government and that you’re (constituents) are the other half.”